Xenoblade Chronicles 3 opens with a lot of cinematic animation, giving us a bit of backstory on our characters and illustrating how different the world of Aionos is from what we’ve experienced in past titles. With war ever present, the people here are largely focused on combat, with all youth being conscripted to combat training and enlisted into the military efforts of their respective factions: Keves, or Agnus. Both nations are ruled by a familiar-looking Queen, ones that our new batch of protagonists have no ties to, but that fans of the series will recognize immediately. These nations are pit against one another to destroy the opposing forces and collect their life energy in the form of motes, which are collected by large ships to be stored in their mysterious Flame Clocks. These machines harvest the life energy of fallen soldiers, and colonies that take the most earn better ranks for their perspective armies. This results in a perpetual war – one where regardless of winning or losing, both sides seem to be more content on the act of battle itself than to think on why they are fighting in the first place.

Our first few protagonists are a young group of Keves special forces. Noah is an off-seer – someone whose task it is to send on the life energy of the departed, a job that he takes to heart. Empathetic and thoughtful, he wishes for there to be other ways to solve things rather than always relying on fighting. His friends and companions, though, don’t seem to question the ways of the world as much as he does. A mission that thrusts the group into intercepting a target of interest changes the course of Noah’s life, altering not only his path, but the paths of his friends alongside a small group of special Agnian forces lead by secondary protagonist Mio. Both groups, used to being at each other’s throats now must work together to survive, and hopefully shed light on the mysteries surrounding the world of Aionos and its peoples, as well as getting to the bottom of a new threat: a group called Moebius that has promised that the entire world is now their enemy. Our heroes are also given a new moniker: Ouroboros, a representation of the continuous cycle of life and death depicted by a snake eating its own tail. Along with this name comes a new power in combat, and with it our young group has the power to change the world around them. 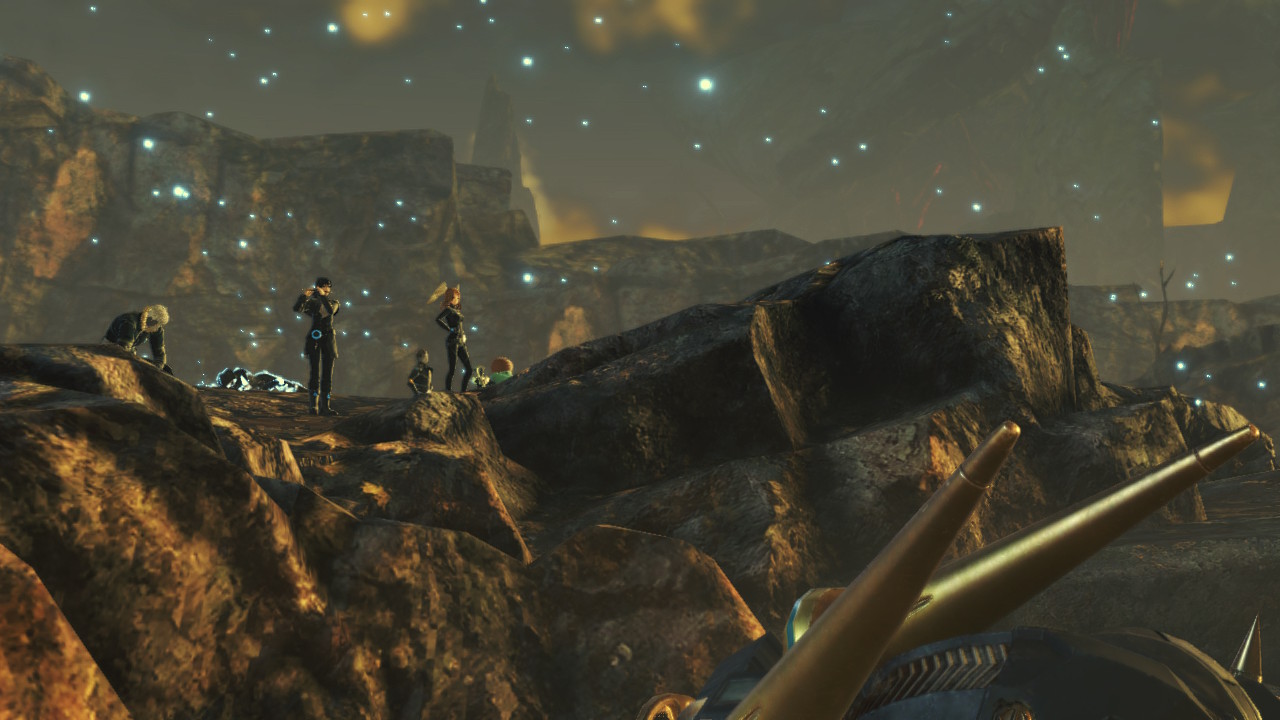 Along their journey, the group gets to look at what its like to be in the opposing faction’s shoes, what the struggles are for all of the colonies, and how Moebius seems to be pulling strings behind the scenes to control what happens across all of Aionos. Struggling with the loss of ally after ally, will the group be able to find a way to dismantle this never ending cycle of bloodshed?

As in past titles, combat is RPG-based. Characters will auto-attack when within range of a targeted enemy, and targets can be swapped easily while fighting with the trigger buttons. Skills called “Arts” can be used when charged, making fights feel more like an MMORPG system than one used in most single-player games. That said, the Arts can be changed out by learning and ranking up in new classes. Class changes are a new addition to Xenoblade Chronicles 3 and allow for the customization of your party by swapping between learned classes. Characters will have a default class to start, but will soon be able to learn other classes from party members and special recruitable NPCs throughout Aionos as the story progresses. With the three roles of attacker, defender, and healer, there’s a variety of team builds that can be created. Being able to change builds between fights is quite handy: changing from a mostly-offense based group for world fights but shoring up defenses and healing for bosses is a tactic I’ve found myself using quite a few times so far. With each class having different strengths and weaknesses, its easy to make sure all your bases are covered, and its even more fun to find combinations that make short work of fights, even if that means setting everyone to DPS and just watching in horror as the aggro table never fully settles. A sloppy win is still a win, after all, but be careful – only healer role characters can revive a downed ally – at least initially. 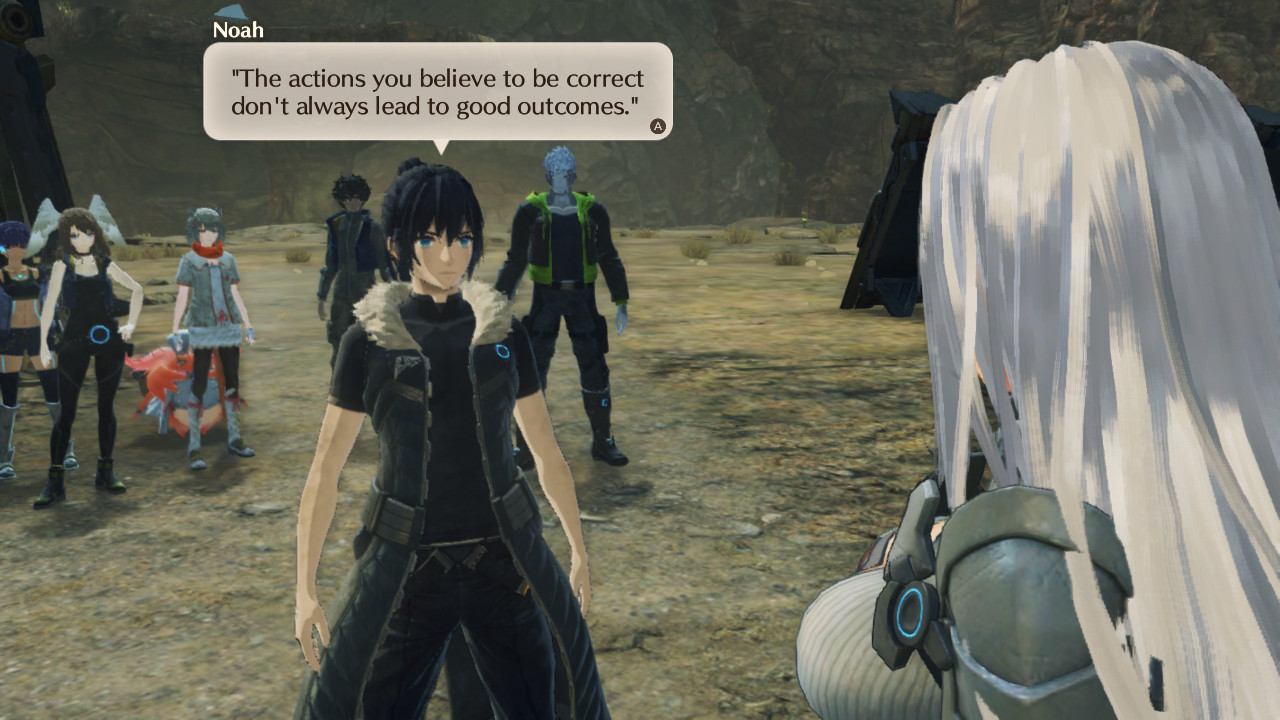 Later in the story, the group will unlock the ability to fuse Keves and Agnian characters with a counterpart. In male and female pairs, the gift of Ouroboros allows two fighters to come together and use their power to morph into a mecha fighter. This enhances their combat power and gives access to a different array of Arts. Additionally, the combo system returns with two pathways: dazes and launches. For daze combos players will want to utilize the following attack sequence: Break->Topple->Daze->Burst. For a launch combo, you’ll go with: Break->Topple->Launch->Smash. These paths allow for damage output to increase, and lower the defenses of the enemy. Different classes will allow for different arts, so keep the paths in mind when building a team and don’t discount how much you can destroy something in the Daze/Smash state. Utilizing a Chain Attack during this time will also compound with damage output, which can really help with getting the party buffed up and back on their feet while dealing out massive damage to an enemy.

Xenoblade Chronicles 3 picks up in a similar artstyle to 2: an anime aesthetic that lends itself to the youthful appearances of our protagonist group, and a vast open world full of flora and fauna. This combination of the animated character approach and the realistic world they live in makes for a colorful game even in the most muted and barren biomes of Aionos. As always, traipsing about the world is a dangerous affair. Not paying attention can have you running into the path of high-level monsters that can floor your party in one blow, so be mindful about your pathing and know that even following the map marker can lead you to your doom if you don’t pay attention to your surroundings. As in previous games, the mini-map, area, and weather are always displayed opposite of your party info, so finding your heading is not difficult in most situations. Additionally, you can easily swap between active story or side quests without having to do so from inside the party menu, with a quick press of the Y button while you have them up on screen. 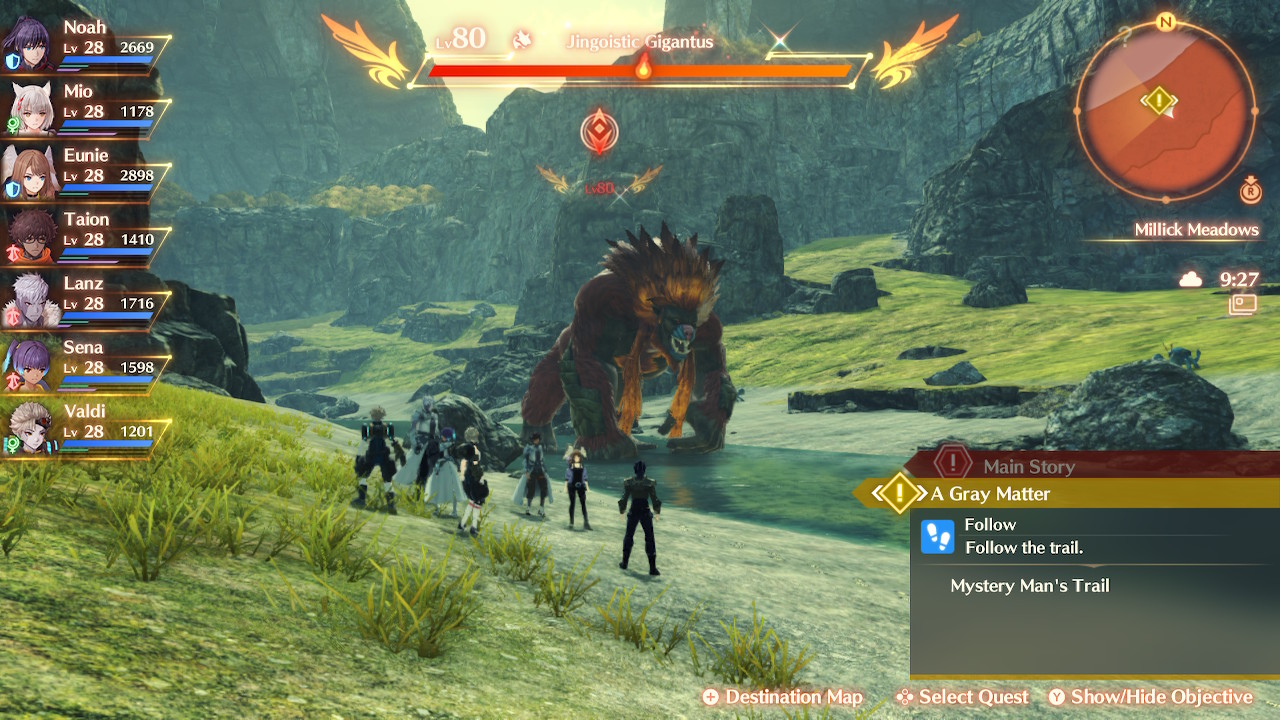 As always, Monolith Soft has pulled out all the stops for the music in its latest game. The soundtrack is beautiful, with energetic melodies during the day and more subdued and somber notes for night time. Aionos comes to life the more you explore it – scouring every nook and cranny may not be for everyone, but those who like the long path will always be rewarded in goodies from containers or supply drops. A lot of the time, I find myself sidetracked by exploring a new area and end up wasting 30 or more minutes attempting to find a way to a glowing container to relieve it of its contents. Containers are, after all, a good source of Nopon Coins, and the more of those you obtain, the easier it is to craft gems with Riku or use food buffs from the team’s wonderful cook Mannana when you don’t have the right ingredients on hand.

Xenoblade Chronicles 3 is a massive game that features many callbacks to past titles with enough new to keep fans pushing forward for more. With an expansive world to explore and myriad side quests to complete, any adventure enthusiast is sure to have their hands full – and there’s more content on the horizon with the Expansion Pass. Spending thirty hours in just the first four chapters (before plowing through and continuing the story mind you) is easy to do. Losing yourself in the side quests and question mark stories across the map is actually the recommended way to enjoy the game, so take your time with this and don’t push yourself to pursue anything before you want to. If you do find yourself at a standstill, pursuing the story may open up other ways to explore more, but there’s no wrong way to be productive: just do what you want to and explore at your own pace. With all the treasures in different areas, the challenging named monsters to hunt down, and collectopedia quests to fulfill there’s no shortage of tasks to cross off the list.

As likely the best bang for your buck that you can invest into an RPG this summer, Xenoblade Chronicles 3 is a massive and charming story with political intrigue, mystery, and a lot of heavy moments that exemplify compassion and doing what is right despite it not always being easy. While we may not have been able to go into detail on every system in this game, you’d be hard pressed to find something you dislike about it – even if the combat system sparks your ire at first, trust that it does get better as you level up and unlock new abilities. Couple the sheer amount of content with a riveting story and you have a must-play title that is sure to scratch your JRPG itch. Don’t miss this one.

Xenoblade Chronicles 3 copy provided by the publisher for the purposes of this review.