It’s been a big year for Flying Wild Hog. The developer of the Shadow Warrior franchise has released not only the third game in the series this year, but also Trek to Yomi, Space Punks in beta, and of course Evil West. It’s also not even the only unique occurrence around the release of Evil West. Just a few months ago back in Spring, we had the release of Weird West, which was also a game with a gothic horror theme in a Western setting. But while that leaned into gothic horror and RPG mechanics, Evil West leans into more of the Xbox 360-era brawlers and action games and the big question there is: does it work?

Mommas, Don’t Let Your Babies Grow Up to Be Hideous Vampire Demons.

The opening of Evil West is a huge tone setter. The protagonist and player character, Jesse Rentier, and his recently (kinda sorta) retired friend, Edgar Gravenor, are conducting a train heist to catch a smuggler transporting a shipment of blood and newborn vampires. In an effort to stop the the train they blow up a massive wooden railway bridge, the monsters get loose and chaos ensues. As it turns out, a burning bridge surrounded with deformed vampire zombie things trying to gut you for your blood is a great setting for a tutorial. You learn that you are on the trail of a powerful Sanguisuge that has garnered a reputation for the strange experiments he and his vampire daughter are conducting.

You are the aforementioned Jesse Rentier (pronounced with both the French “Rent-ee-ay” and English “Rent-ee-er” versions by different characters at different times), who looks cool as all get out. He is the son of the current head of the Rentier Institute; a privately founded and operated, but government sponsored and supervised, organization that has apparently been working in the shadows for generations. They exist to fight off the Sanguisuge and other vampire clans. After the initial two few levels set up the world you find yourself at the Rentier Estate going to meet your father ahead of a presentation for a new weapon he’s developing. I’ll stop there to avoid spoilers.

Something I noticed right away about the world building is how big and detailed it is yet it’s never fully explained. This could be really annoying but I was actually intrigued. You are never explicitly told what Sanguasuge means, nor is the origin story for the Rentier Institute ever fully laid out. Rather than feeling confused, I found that it felt more like the authors trusted their audience to piece the peripheral details together without having to hand-hold. I appreciated the effort given how many games either never explain a single thing or way over explain and don’t leave any room for imagination.

The music is also above its own pay grade, and I found that I wanted to play with the sound on just for the music. There isn’t a huge variety in the score, and you will hear the same few songs played often, but the vibe that the music sets works like it should. Eerie nervousness leading into loud bombastic pieces during fights is a great compliment to the games setting and tone.

I had low expectations for the story going in and was pleasantly surprised. The cutscenes are done competently and feel engaging. I cared about what was happening even if some of the voice acting was hit or miss. It isn’t Hang ‘Em High but it is a solid story in a Western setting. The occasionally… not outstanding graphics hold it back as well, but more on that later.

The only issue I really have with the narrative is how you never really see the character traveling these apparently vast distances on his horse. The cut scene ends, and suddenly you’re at the next town. It can be jarring when they talk about a three-day journey but then you’re just standing at the town gate a couple of blacked out seconds later. You see the horse in some cutscenes, especially early on. But for most of the game it’s just usually standing behind an invisible wall behind you at the beginning of a level. It is one of several aspects that give away that this was made on a mid level budget.

The story is good. The world building is great. The graphics wane. The music is great if limited. The good thing is that while the narrative is prominently featured, it is not the core selling point of Evil West.

Carry on, My Wayward Son

As you fight through the first tutorial level you are introduced to the basic loop of gameplay Evil West presents. You move through a linear path from an over-the-shoulder perspective solving some simple environmental puzzles and searching for chests and bags of gold. The bread and butter of Evil West however is thankfully the frequent combat arenas in which you find yourself in. 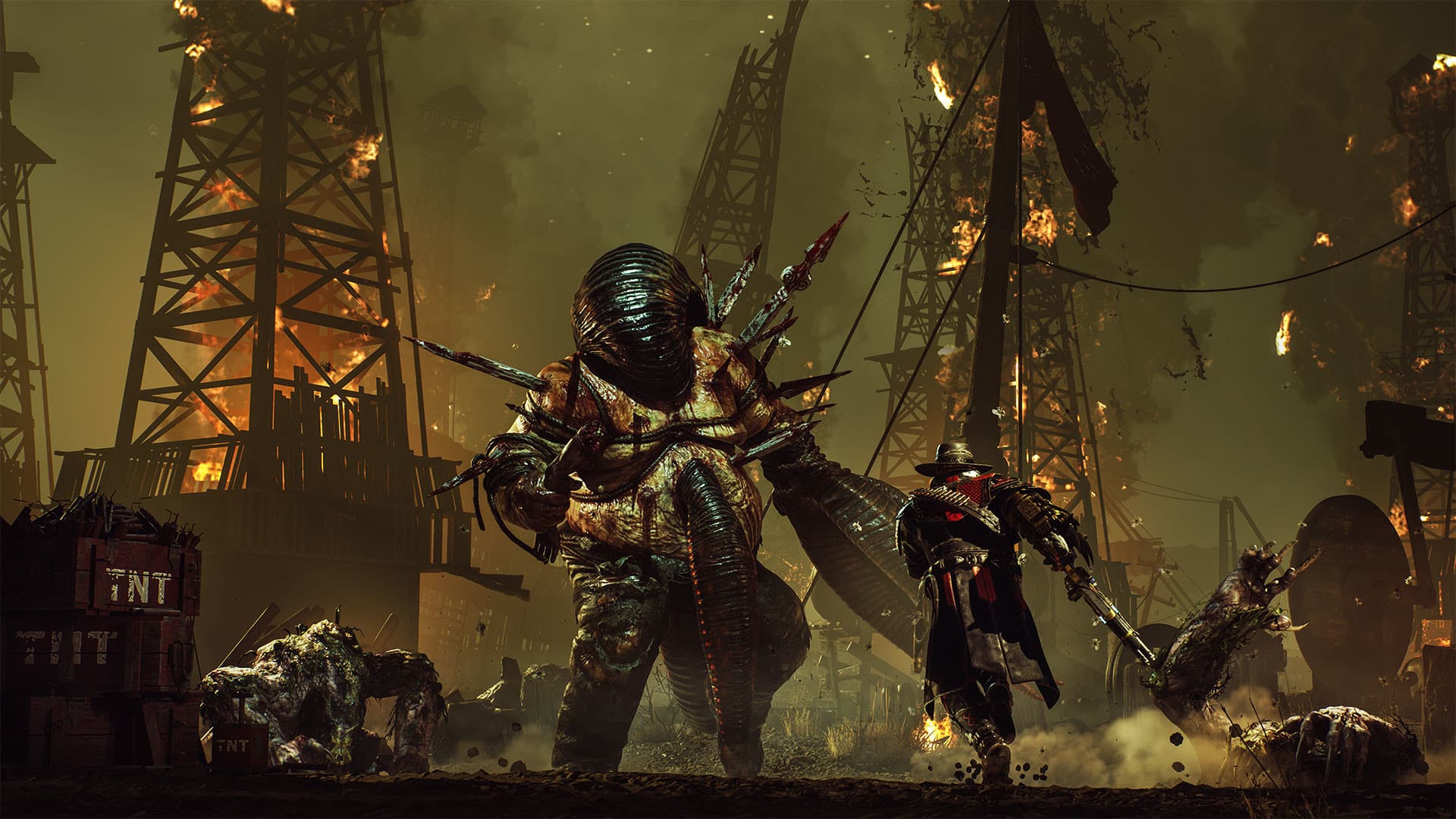 Weapons and mechanics are introduced through most of the game at a steady clip, as are new enemy types or variations. You start with the gauntlet for punching and blocking. The Rentier Revolver quick fires auto aimed rounds at the enemy you’re looking at. The Rentier Rifle is a precision projectile weapon used by aiming with the left trigger and then firing with the right. The controls are a modified version of the Soulslike controls with the right bumper being the main melee attack. But as the game goes on your inventory balloons to be easily a dozen options at any given moment. Given the speed and intensity of the combat, you end up with an incredible sense of action and power in the midst of chaos.

If I were to make any comparisons it’s a brawler with the sensibilities of both Dark Souls and DOOM and just a ton of games I few up playing. As I’ve covered at this point, there are guns but it’s better thought of as a third-person action game. However you decide to describe it: I think it’s an absolute blast. I got excited every time I realized I was coming up on another combat encounter. The weapons were diverse and fit together extremely well. I used almost all of them in nearly every fight. If you’re looking for a third-person action game you came to the right place.

It wouldn’t be a review if we didn’t talk about some of Evil West’s shortcomings. The graphical issues are the biggest drawback. I found that I had to switch to performance mode in the first level from all the clipping and frame rate issues. After that, it ran fine from a frame rate perspective but the graphics were fuzzy. Thankfully, they didn’t get in the way of the gameplay but there were a number of times where textures either popped in or just never showed up. The latter more often in the case of the 3D items in the menus. 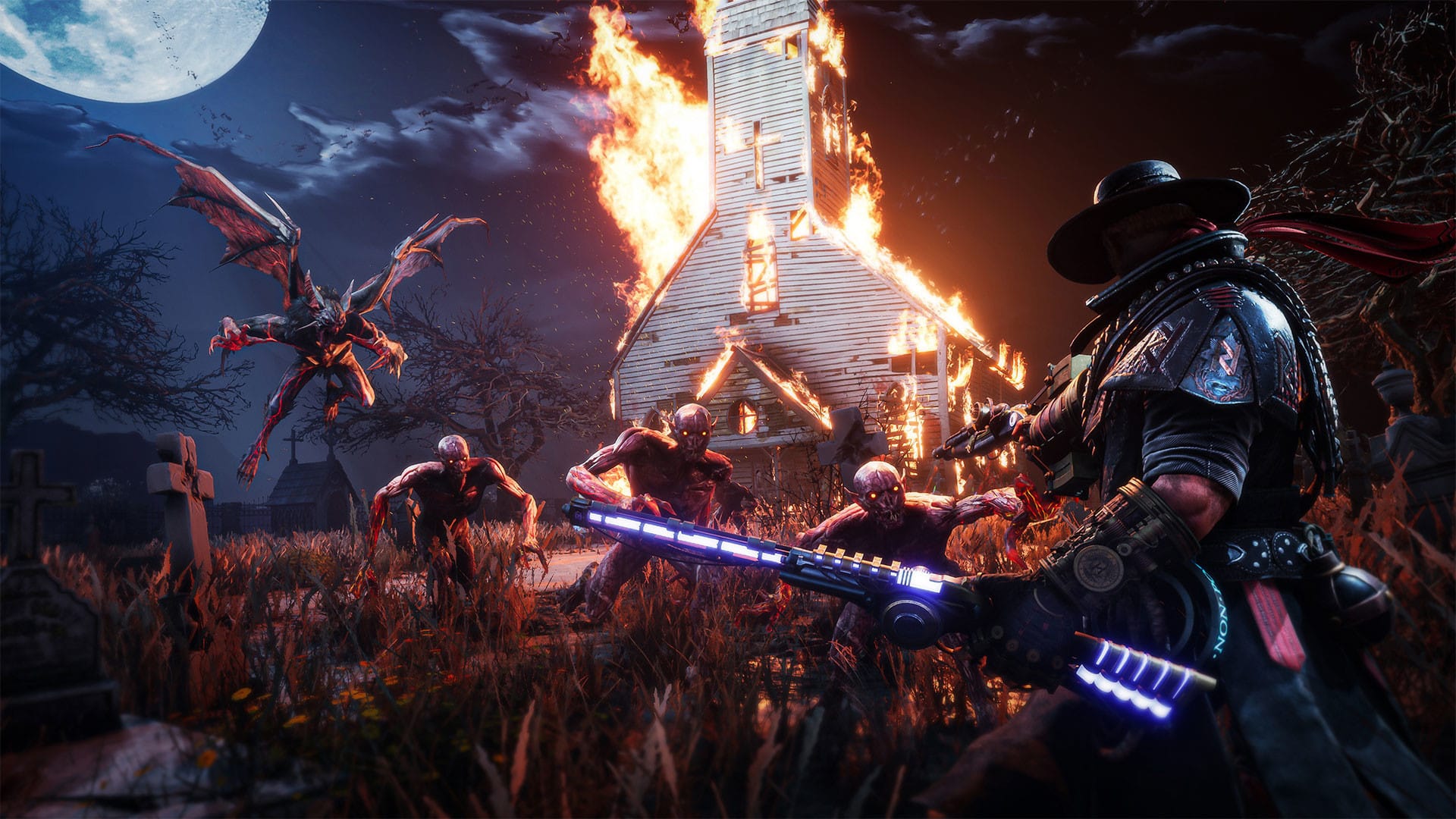 I did also encounter two other glitches. In one case Jesse got stuck in a piece of the world and I couldn’t shake free. The game doesn’t have a great way to reload your last save point. In fact, the game seems to save before you enter a combat arena but not after you’ve finished it. So I had to close and relaunch the game and then redo the previous combat arena to get back to where the glitch happened, and I just avoided the little bridge I got stuck on the first time. I didn’t have another geometry problem after that. But it really took me out of the moment.

On another occasion I threw a grenade during a combat encounter and the explosion sound continued to play for the rest of the fight and for some time afterwards. I tried several ways to reset the sound but nothing worked so I again had to relaunch the game and replay the combat encounter but that also never happened again.

I think that you can chalk both of these bugs up to budgetary issues, as this clearly was made on a budget. Other than the momentary whiplash in the experience, I didn’t find the glitches to be game breaking.

When I beat Evil West’s last fight and watched the final cutscene, I went to the main menu, took some notes, and immediately launched the New Game +. I then replayed the first two levels and part of the third. I just wanted more. It might be the fact that it feels like the games I grew up playing. It is an imperfect game. But I loved it and I think it is exactly what I’ve been wanting without realizing it. The up close and personal brutality of a third-person brawler, with the pattern analyzing of a Soulslike and the frenetic action of DOOM. Not to mention the western setting which I am on the record as loving. I have not had a game where I so wanted to immediately play a sequel in a long time. I so hope that we get one as I think this is a world worth exploring and characters worth revisiting — especially if Flying Wild Hogs is given a bigger budget of which I very much think this franchise is deserving.