Child’s letters to Santa go viral: ‘You look slow and easy to kill’

He’s on the naughty list now! Child’s hilarious letters demanding more presents from Santa go viral: ‘You look slow and easy to kill – enjoy your cookies next year because they will be POISON’

By Ronny Reyes For Dailymail.Com

A hilarious letter from a young boy threatening to kill Santa after he did not get the expensive gift he wanted has resurfaced and gone viral on social media.

TikTok user Kodi Mink cracked up as he read the letters exchanged between a boy named Jeremy and old Saint Nick, with the child upset he only got one of the two gifts on his Christmas list despite putting milk and cookies out.

‘Dear Santa, I am writing this the day after Xmas and I am very sad I only received one of the two presents I asked for,’ the first letter reads. ‘Sense [since] you ate my cookies I will asoom [assume] that my missing gift was a miss take [mistake].’

Jeremy warned the jolly old elf that he had one week to correct his error, but the follow-up letter from Santa showed he wouldn’t be entertaining the child’s demand.

‘Dear Jeremy, I am sorry you are disappointed with your presents. You asked for two very expensive presents and Santa can only do so much,’ he wrote back.

‘You need to learn to be grateful for what you have and not be upset about what you don’t. If you continue to complain I will have no choice but to add you to the naughty list next year.’

Things quickly escalated as the child lashed out at Santa, dubbing him ‘fatty’ and warning him to back off and cough up the gift or face poison cookies.

A hilarious letter exchange between a boy named Jeremy and Father Christmas, where the child threatens him, went viral on TikTok as Kodi Mink read it aloud (above) 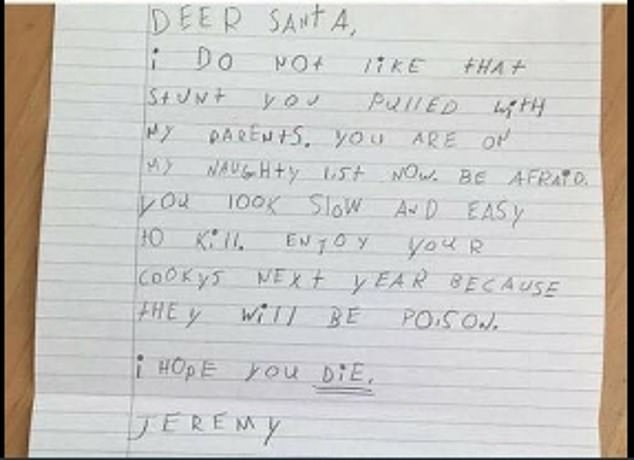 In the letters, Jeremy warns Santa that come next Christmas, he’ll have to contend with poison cookies, noting that jolly St Nick was ‘slow and easy to kill’

Mink recounted the letter in a video viewed more than 18 million times, with the TikToker barely able to breath as he laughed at the 2017 exchange between Jeremey and Santa.

After the initial warning from Father Christmas, Jeremy wrote: ‘Dear Fatty, Your threats don’t scare me. I played your game and you did not deliver.

‘This is not okay. I will give you one week and then you will pay

‘PS I don’t know why you that it is expensive when you have elf slaves to make things for you I think you are very naughty for having slaves,’ Jeremy cheekily pointed out.

The comments appeared to strike a nerve with Santa, who retaliated by taking away Jeremy’s WiiU gaming console.

‘Dear Jeremy, You are being a very bad little boy,’ Santa wrote. ‘Because you cannot be happy with what you have, I have talked to your parents and told them to take away your Wii U.’

‘Now you have nothing. Once you learn to be grateful, perhaps you can have it back. I am disappointed in you Jeremy. You will need to be extra good this year if you want to make it back in the nice list.’ 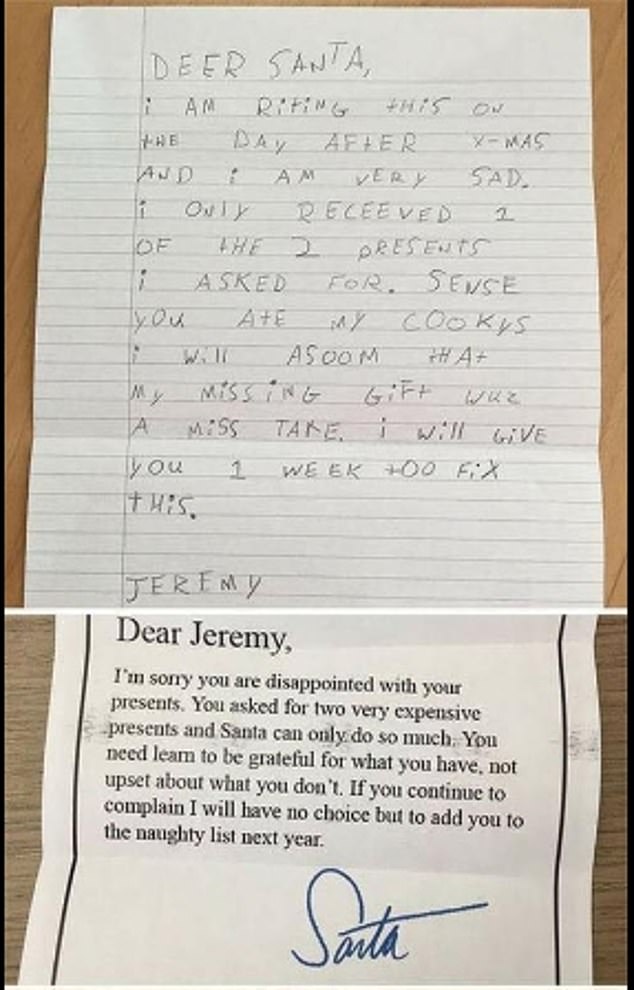 The letter exchange began with Jeremy upset at Santa for not getting him the second gift he asked for, giving him one week to correct the issue. Santa warned Jeremy to be nice 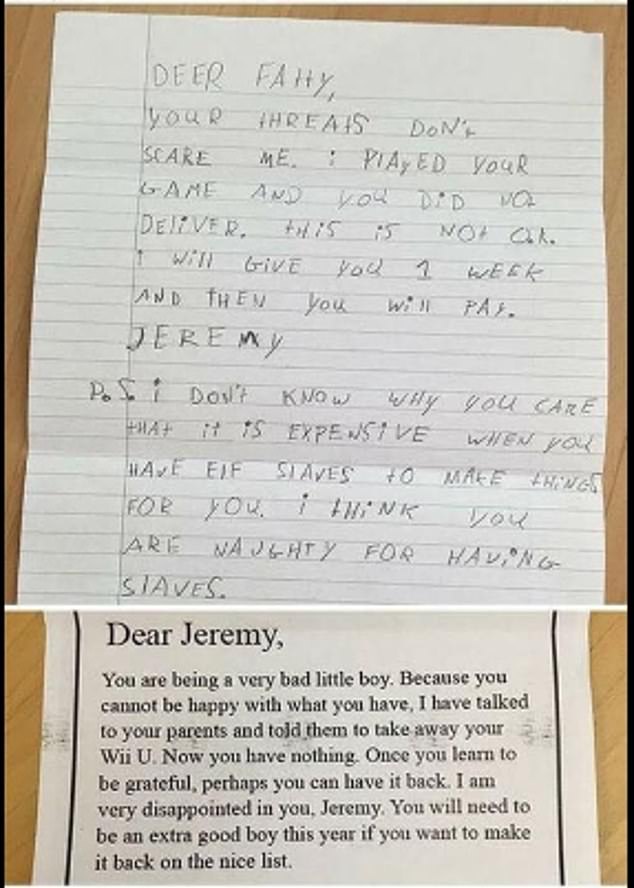 Undeterred, the boy quipped that getting the expensive gifts should be no problem for someone with ‘elf slaves.’ The back-and-forth results with Santa putting the boy on the naughty list and taking away his WiiU gaming console

That was the final straw for Jeremy, who went on to warn him what was in store for him next Christmas.

‘Deer Santa, I do not like that stunt that you pulled with my parents. You are on my naughty list now,’ the boy warned.

‘Be afraid you look slow and easy to kill. Enjoy your cookies next year because they will be poison. I hope you die Jeremy.’

After the reading the final line, Mink could howled with laughter as he said, ‘Jeremy was not f****** playing.’

The hilarious letter first made the rounds on social media in 2017, and occasionally resurfaces during the holiday season, with many encountering the comical exchange for the first time this year.